PhotoDemon 8.0 was a massive release, comprising more than 2.5 years of work. Despite all that effort, some software bugs and usability issues slipped through the cracks.

Today’s 8.2 release aims to fix that!

If you already have a copy of PhotoDemon, you’re good to go! The program will automatically update according to your preference in the Tools > Options > Updates menu.

Thank you to everyone who reported issues and shared feedback over the past two weeks. I am indebted to all of you. ❤

And of course, an extra-large thank you to all of PhotoDemon’s Patreon supporters, whose regular donations make this project possible. If you find PhotoDemon useful, consider joining our Patreon campaign or making a one-time donation. Every little bit helps.

What’s new and improved in 8.2

I apologize that 8.0 shipped with poor stability on Windows XP. Supporting Windows 10 (and its myriad configurations) consumes a great deal of time, so PhotoDemon’s ongoing XP support relies heavily on user-submitted bug reports.

If you are an XP user, please consider running PhotoDemon’s nightly builds so you can help me catch XP-specific bugs earlier in my development cycle.

PhotoDemon 8.0 was delayed more times than I could count. Eventually I felt I had to push it out the door, even though some usability issues weren’t quite resolved. The past few weeks have given me a chance to catch up on those items, and I’m happy to ship those updates immediately (instead of waiting for 9.0).

Here are some of the user-experience improvements available in 8.2.

The color-picker tool now provides a “switch back to previous tool” option, similar to Paint.NET’s color-picker.

For GIMP or Photoshop veterans, another option is available. While using a paint tool, press and hold the ALT key to temporarily switch to the color picker tool. Pick as many colors as you want from the image, then release ALT to return to your original tool.

This is demonstrated in the following animation, as I repeatedly press and release ALT while moving the cursor across the image: 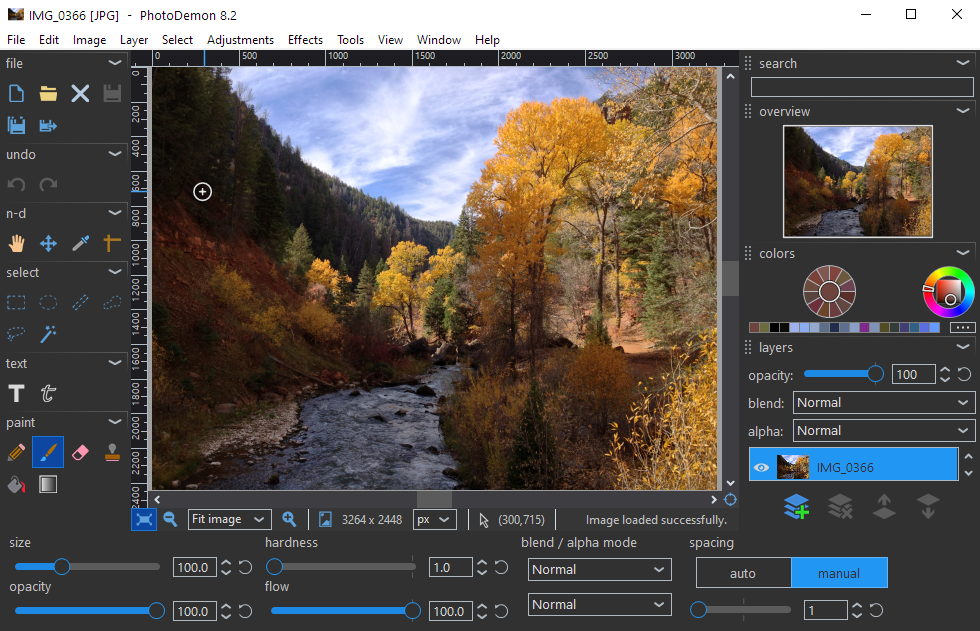 One of PhotoDemon’s best features is how quickly it starts. As more and more tools find their way into the program, it takes a lot of work to keep startup time svelte, and sometimes I can go overboard in trying to maximize the program’s lightweight nature.

One such problem in 8.0 was PhotoDemon’s approach to initializing on-canvas tools (e.g. everything accessible from the left-side toolbar). After using a tool, PhotoDemon would aggressively unload everything associated with that tool, including its options panel and any number of internal caches. This could lead to delays and stutters if you rapidly switched between tools, especially on older hardware.

In 8.2, I have written a new caching engine for PhotoDemon’s on-canvas tools. When you load a tool for the first time, there may be a slight delay as the app fully initializes everything the tool requires. But when you are finished with a tool, PhotoDemon is now much smarter about what it frees and what it retains of each tool engine. If you return to a tool during a session, you’ll now find that PhotoDemon has it instantly ready for you, no more hesitation or delays.

(This feature was a critical part of enabling the improved color-picker tool mentioned earlier.)

Menu mnemonics, sometimes called “access keys”, are a way to navigate program menus using your keyboard. In Windows, you use them by holding down the ALT key, then pressing a corresponding letter for each menu - e.g. Alt+F will open the File menu.

Menu mnemonics are handy for users, but cumbersome for developers. Developers have to assign each menu (and sub-menu, and sub-sub-menu) a unique letter that is not shared by any sibling menus. When new menus get added to the program, you need to shuffle around existing mnemonics to make room for them… something I often forget to do.

Even trickier is that some menu text can change at run-time - for example, PhotoDemon changes the Edit > Undo text to reflect your last-used tool, e.g. Edit > Undo Gaussian Blur. When menu text changes, menu mnemonics may need to be revisited.

And of course, each language translation requires different mnemonics, because Alt+F may make sense in English, but not in your language.

In PhotoDemon 8.2, I finally solved this “once and for all” by writing a new mnemonics engine that generates mnemonics for me. It works across all languages, for all main menus in the project. When you press the ALT key, a mnemonic for each menu item is automatically underlined. Keys can be chained together to drill into multiple menu layers; for example, Alt F B P takes you to the File > Batch operations > Process wizard, as in this animation: 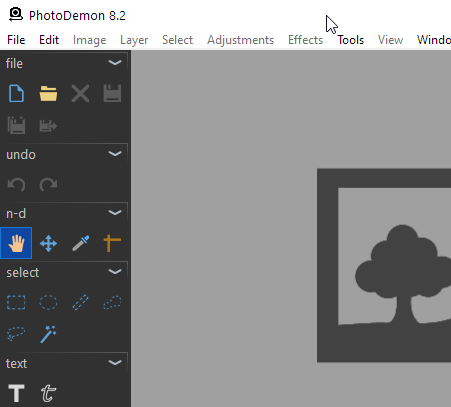 See how the mouse cursor doesn’t move as the menus open? That’s because I’m only using the keyboard!

In languages where there isn’t a clear mapping between keyboard keys and characters (like Simplified and Traditional Chinese), PhotoDemon follows convention and uses English equivalents for mnemonics, with the relevant keyboard letter displayed after the menu caption: 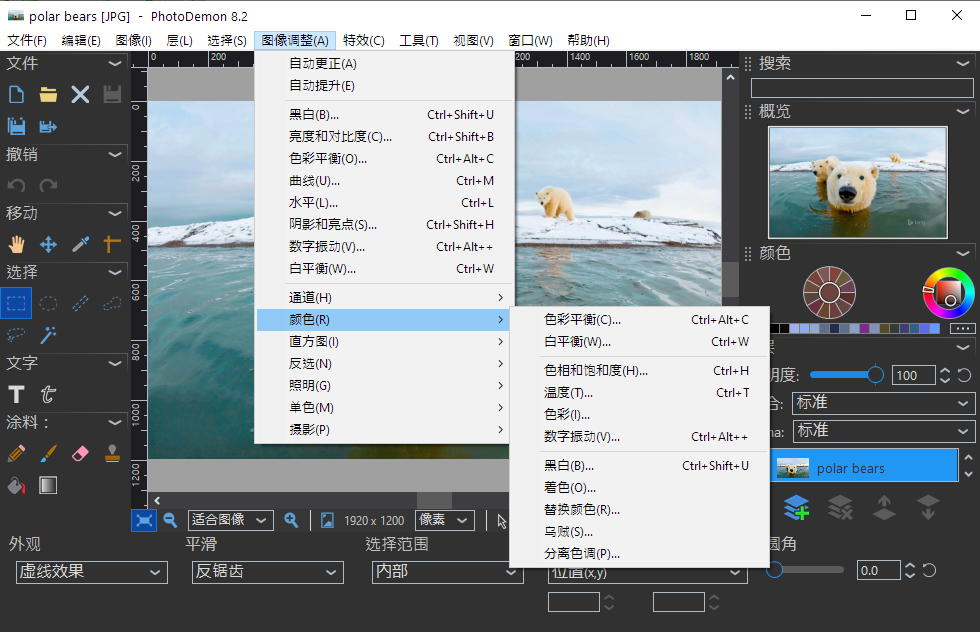 This accomplishes a long-time goal of allowing users to fully navigate PhotoDemon’s menu system without involving the mouse.

As part of supporting that tool, PhotoDemon provides built-in support for editing animated image files. When you load an animated PNG (or GIF) into the project, PhotoDemon automatically extracts each frame to its own layer. Each layer’s name contains details like frame time, which you can freely modify. And when you save an animated image back out to file, PhotoDemon will automatically optimize all of the frames into their smallest possible representation, while attaching metadata like frame time and repeat count for you.

To further expand on PhotoDemon’s new animated image support, I have added a new Image > Animation menu to the project. This provides a way to modify animation-specific details of an image, or to convert a static image to an animated one (or vice-versa). It also gives you a place to preview animations with very large dimensions, because the dialog is fully resizable. 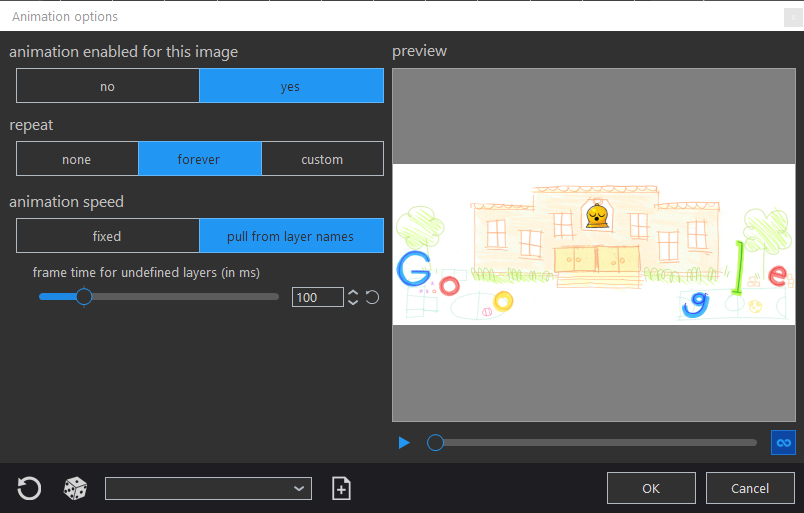 A dialog like this seems simple, but to make it work with PhotoDemon’s mantra of “fast and portable” was… not easy. PhotoDemon is quite aggressive about minimizing memory usage, and this new animation preview window required a bunch of new tricks to display animations fluidly while using as little memory and CPU as possible.

But the end result is very lightweight - so lightweight, in fact, that I plan on stealing some of its tricks for reuse elsewhere in the project!

Other languages have seen myriad improvements thanks to PhotoDemon’s amazing volunteer translators. (Thank you to all of you!)

I have also made the hard decision to remove some language translations from the project. In all cases, these were language files that were primarily auto-translated using software of varying quality. The translations were not usable in their current state, and they need to be redone from scratch with input from native speakers.

If you can help translate PhotoDemon into your language, please reach out to me. PhotoDemon ships with a built-in language file editor, and a full translation can be created surprisingly quickly.

Many other minor bug-fixes

I won’t bore you with the details, but lots of little annoyances and issues have also been fixed. Thank you again to everyone who submitted bug-reports and feedback.

With 8.2 wrapped up, my attention now turns to PhotoDemon 9.0. I’ve got my own roadmap of new features and improvements that I’ll be working on, but I’m also interested in hearing from you! What would you like to see in PhotoDemon 9.0? What would make the app more useful to you? Are there any features you just can’t live without?

If so, please let me know. You might be surprised by how many of PhotoDemon’s existing features were suggested by users. Even if a feature request seems crazy, I’d still like to hear it. Sometimes things that sound crazy aren’t actually that hard to do.

Finally, let me plug PhotoDemon’s Patreon campaign one more time. If I can get enough donations, I’d love to purchase a drawing tablet so that I can properly support painting tools in PhotoDemon, with full support for dynamic pressure, tilt, and other features. Patreon is a great way to help that happen, and as a bonus, you’ll also get access to inside looks at PhotoDemon 9.0 as it progresses.

If Patreon isn’t a good fit for you, one-time donations are also a tremendous help. Thank you in advance for your generosity.

I hope you enjoy PhotoDemon 8.2. Stay healthy and safe, and I hope it won’t be long before I can share PhotoDemon 9.0 with you.